Sabres and swords
The sabre is a kind of backsword that usually has a curved, single-edged blade and a rather large hand guard, covering the knuckles of the hand as well as the thumb and forefinger. Although sabres are typically thought of as curved-bladed slashing weapons, those used by the world's heavy cavalry often had straight and even double-edged blades more suitable for thrusting. The length of sabres varied, and most were carried in a scabbard hanging from a shoulder belt known as a baldric or from a waist-mounted sword belt, usually with slings of differing lengths to permit the scabbard to hang below the rider's waist level . Exceptions not intended for personal carry include the Patton sabre adopted by the United States Army in 1913 and always mounted to the cavalryman's saddle.

Usage
The sabre saw extensive military use in the early 19th century, particularly in the Napoleonic Wars, during which Napoleon used heavy cavalry charges to great effect against his enemies. Shorter versions of the sabre were also used as sidearms by dismounted units, although these were gradually replaced by fascine knives and sword bayonets as the century went on. The sabre faded as a weapon by mid-century, as longer-range rifles made cavalry charges obsolete, even suicidal. In the American Civil War, the sabre was used infrequently as a weapon, but saw notable deployment in the Battle of Brandy Station and at East Cavalry Field at the Battle of Gettysburg in 1863. Many cavalrymen—particularly on the Confederate side—eventually abandoned the long, heavy weapons in favour of revolvers and carbines. Although there was extensive debate over the effectiveness of weapons such as the sabre and lance, the sabre remained the standard weapon of cavalry for mounted action in most armies until World War I (1914–18). Thereafter it was gradually relegated to the status of a ceremonial weapon, and most horse cavalry was replaced by armoured cavalry from 1930 on. In the Polish–Lithuanian Commonwealth (16–18th century) a specific type of sabre-like melee weapon, the szabla, was used. The Don Cossacks used the shashka, which also saw military and police use in the Russian Empire and early Soviet Union. 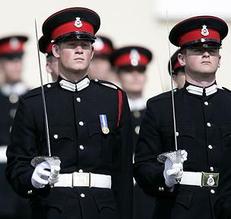 Swords
A sword is a bladed weapon (edged weapon) used primarily for cutting or thrusting. The precise definition of the term varies with the historical epoch or the geographical region under consideration.

In the most narrow sense, a sword consists of a straight blade with two edges and a hilt. However, in some cases the term may also refer to weapons with a single edge (backsword).

The word sword comes from the Old English sweord, cognate to Old High German swert, Old Norse sverð, from a Proto-Indo-European root *swer- "to wound, to cut". Non-European weapons called "sword" include single-edged weapons such as the Middle Eastern saif, the Chinese dao and the related Japanese katana. The Chinese jian is an example of a non-European double-edged sword, like the European models derived from the double-edged Iron Age sword. 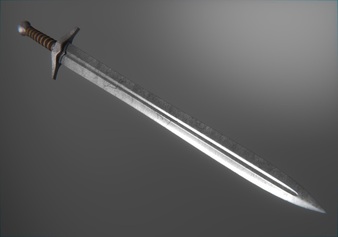 Historically, the sword developed in the Bronze Age, evolving from the dagger; the earliest specimens date to ca. 1600 BC. The Iron Age sword remained fairly short and without a crossguard. The spatha as it developed in the Late Roman army became the predecessor of the European sword of the Middle Ages, at first adopted as the Migration period sword, and only in the High Middle Ages developed into the classical arming sword with crossguard.

The use of a sword is known as swordsmanship or (in an early modern or modern context) as fencing. In the Early Modern period, the sword developed into the rapier and eventually the smallsword, surviving into the 18th century only in the role of dueling weapon. By the 19th century, swords were reduced to the status of either ceremonial weapon or sport equipment in modern fencing.

The sword is said to be the emblem of military honor and should incite the bearer to a just and generous pursuit of honor and virtue. It is symbolic of liberty and strength. In the Middle Ages, the sword was often used as a symbol of the word of God. The names given to many swords in mythology, literature, and history reflect the high prestige of the weapon and the wealth of the owner.
back to history