Bayonet
A bayonet (from French baïonnette) is a knife, sword, or spike-shaped weapon designed to fit in, on, over or underneath the muzzle of a rifle, musket or similar weapon, effectively turning the gun into a spear. In this regard, it is an ancillary close-quarter combat or last-resort weapon.

However, knife-shaped bayonets—when not fixed to a gun barrel—have long been utilized by soldiers in the field as general purpose cutting implements. 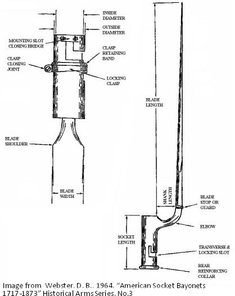 History
The origins of the bayonet are hazy, but appear to have begun in 17th century France. The term 'Bayonette' dates back to the end of the 16th century; but it is not clear if the weapon at the time was the specialized instrument that it is today, or simply a type of knife. For example, Cotgrave's 1611 Dictionarie describes the Bayonet as 'a kind of small flat pocket dagger, furnished with knives; or a great knife to hang at the girdle'. Likewise, Pierre Borel wrote in 1655 that a kind of long-knife called a 'bayonette' was made in Bayonne but does not give any further description.

There is a legend that during the mid-17th century irregular military conflicts of rural France, the peasants of the Southern French town of Bayonne, having run out of powder and shot, rammed their long-bladed hunting knives into the muzzles of their primitive muskets to fashion impromptu spears and, by necessity, created an ancillary weapon.

Another possibility is that the bayonet originated as a hunting weapon: early firearms were fairly inaccurate and took a long time to reload; thus a hunter of dangerous animals such as wild boar could easily have been exposed to danger if the hunter's bullet missed the animal. The bayonet thus may have emerged to allow a hunter to fend off wild animals in the event of a missed shot. This idea was particularly persistent in Spain where hunting arms were usually equipped with bayonets from the 17th century until the advent of the cartridge era. The weapon was introduced into the French army by General Jean Martinet and was common in most European armies by the 1660s.

The benefit of such a dual-purpose arm contained in one was soon apparent. The early muskets fired at a slow rate (about 2 rounds per minute when loading with loose powder and ball, and no more than 3–4 rounds per minute using paper cartridges), and could be both inaccurate and unreliable depending on quality of manufacture. Bayonets provided a useful addition to the weapons system when an enemy charging to contact could cross the musket's killing ground (a range of approximately 100 yards/meters at the most optimistic) at the expense of perhaps only one or two volleys from their waiting opponents. A 12-18 inch (30–45 cm) bayonet on a 5-foot (around 1.5 meters) tall musket achieved a reach similar to the infantry spear, and later halberd, of earlier times. The bayonet/musket combination was, however, considerably heavier than a polearm of the same length.

Early bayonets were of the "plug" type. The bayonet had a round handle that slid directly into the musket barrel. This naturally prevented the gun from being fired. In 1671, plug bayonets were issued to the French regiment of fusiliers then raised. They were issued to part of an English dragoon regiment raised in 1672 and disbanded in 1674, and to the Royal Fusiliers when raised in 1685. The danger incurred by the use of this bayonet (which put a stop to all fire) was felt so early that the younger Puységur invented a socket bayonet in 1678 that fitted over the muzzle using a circular band of metal, allowing the musket to be loaded and fired. However, it was not widely adopted at the time.

The defeat of forces loyal to William of Orange by Jacobite Highlanders at the Battle of Killiecrankie in 1689 was due (among other things) to the use of the plug-bayonet; and shortly afterwards the defeated leader, Hugh Mackay, is believed to have introduced a ring-bayonet of his own invention. Soon "socket" bayonets would incorporate both ring mounts and an offset blade, keeping the bayonet well away from the muzzle blast of the musket barrel.

An unsuccessful trial with socket or zigzag bayonets was made after the battle of Fleurus, 1690, in the presence of Louis XIV, who refused to adopt them, as they had a tendency to fall off the musket. Shortly after the Peace of Ryswick (1697), the English and Germans abolished the pike and introduced ring bayonets; and plates of them are given in Surirey de St. Remy's Mémoires d'Artillerie, published in Paris in that year; but owing to a military cabal they were not issued to the French infantry until 1703, using a spring-loaded locking system to prevent the bayonet from accidentally separating from the musket. Henceforward, the socket bayonet became, with the musket or other firearm, the typical weapon of French infantry. 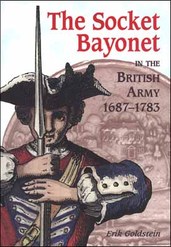 The socket bayonet had by then been adopted by most European armies. The British socket bayonet had a triangular blade with a flat side towards the muzzle and two fluted sides outermost to a length of 15 inches (38 cm). However it had no lock to keep it fast to the muzzle and was well-documented as falling off in the heat of battle.
back to history