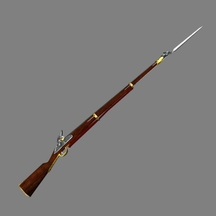 In the Napoleonic era the main weapon of any army was the musket, as it provides perfect balance between melee and ranged combat.
Muskets provide a decently accurate shot on range and are equipped with a deadly bayonet for when the fight gets personal.

Muskets in Mount&Blade: Napoleonic Wars are pretty much the king of this battlefield. The bayonet mounted on them is as lethal as the ball you fire and will instant-kill most of the time depending where you aim at. Musket balls when fired have a percentage of missing randomly the longer the shot. The Reload time is around 10 seconds from firing which can be shorted slightly by a buff. If you’re interrupted halfway through a reload you will continue it when you return to it. Musket ammunition is usually thirty cartridges.

Cavalry and light infantry will have the option of a cavalry musket with is essentially a normal musket without bayonet but has a second knocked off of its reloading time.

Bayonets attached to the end of your musket can only attack in thrusts, the overhead attack being slower but powerful enough to one hit kill if timed right.

Flintlock Pistols are Officer sidearms and are notoriously inaccurate and best used for close range engagements before closing in. They have the ammunition of 18 musket balls.
Rifles: 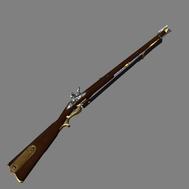 The obvious tool of choice for the Rifleman, is the newly invented musket rifle. With three times the range the default muskets have but with a slightly longer reload time and no bayonet the Rifle is perfect for the ultimate early sniper. Riflemen are usually armed with a short sword for melee defence but if all else fails they can reverse their weapons with X and club a man to death if needs be. 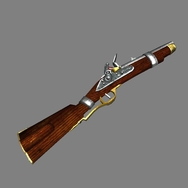 The musketoon is a shorter barrelled version of the musket, and served in the roles of a shotgun or carbine. Firing shot in short range cone instead of a musket ball in a line these guns are perfect for the ride by attacks as mounted dragoons or the luckiest weapon a Russian conscript or light infantryman can wield. Obviously no bayonet is included with these little beauties.